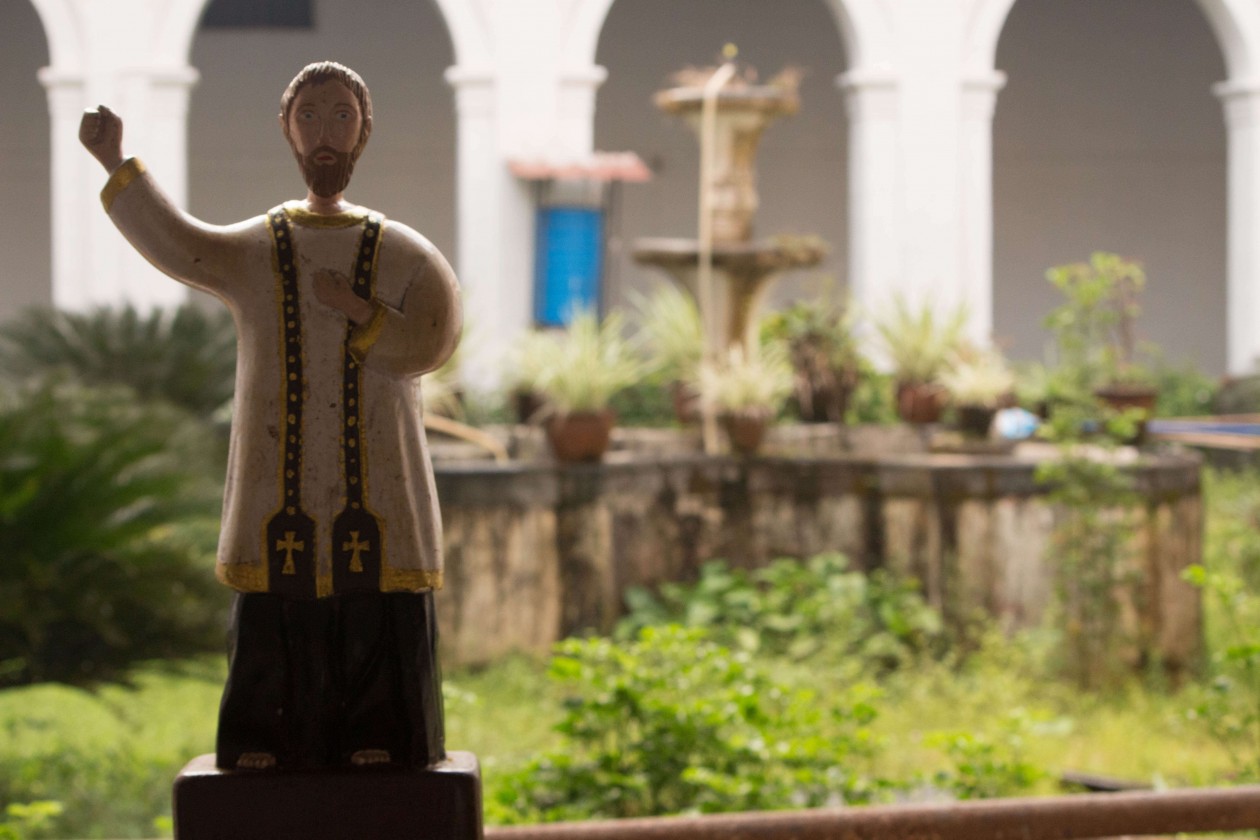 I reached Margao at 8:30 pm.  I had booked an Airbnb that cost me Rs. 2000 for 3 nights. Aaron was my host and his house was about 10 minutes from Colva beach by scooter. He was really kind and dropped me to the restaurant Kentuckee on Colva beach, which is quite famous for its food in that locality for dinner. My dinner was very simple; fish curry and rice with a fish steak.  All the places from where I could rent a scooter were shut, so I had to walk back home. The streets were completely dark and deserted with the occasional lights from the vehicles passing by. The 20 minute walk felt a lot longer than it should have and I went to bed immediately, as I planned on starting early the next day.

The locals in Goa are really friendly and helpful. The watchman of the building where I was living at gave me details of a scooter rental place (Valencia Rental, Colva 09921348359). They gave me a deal of Rs. 900 for 3 days to rent a scooter. I headed to Majorda beach. This beach wasn’t as clean as the other beaches I had visited. There is a Lagoon on the beach but it is quite dirty and I would not recommend entering it. There were a very few people on the beach, probably because it was quite early in the morning. I had breakfast at a stall on the beach; Hot cup of tea along with pav and potato bhaji all for just Rs. 30.

Next up, I headed to San Jacinto Island. This island is just a few kilometers to the north-east of Dabolim airport. Silver Gate bridge connects the island to the mainland. This destination is quite underrated and you will not find many tourists here. The island is famous for St. Hyacinthi Church, which celebrates its feast on the last Sunday of September. There is also a chapel on the island that has an underground tunnel leading to the other side of the river. The island is majorly a residential area and life on the island is slow. There also is an old lighthouse, from the top of which you will get a breathtaking view of the Goa coast.

22 km North of San Jacinto is the statue of Dona Paula. This place is a popular tourist attraction and was very crowded when I reached. The fishermen of the area have a collection of ghost stories about Dona Paula. They say that on pitch dark nights and sometimes at the stroke of midnight, she rises from the sea and roams the area, wearing a string of pearls and nothing else. I did not stay here for long and proceeded to Panjim.

Our Lady of immaculate Conception Church in Panjim stands out with its great Portuguese architecture. The entire exterior of the church is bright white. I reached here just around 2 pm and the church was closed for visitors till 3:30 pm. I had a quick meal at George’s Restaurant opposite the church. The pork vindaloo with pav was delicious. The interior of the church is very colorful and has a lot of gold plated carvings. The main alter is dedicated to Mother Mary. On the 8th of December every year the church celebrates its feast with all fervor. The church is decorated with white and blue flowers and there is a procession led by a brass band that plays the festive fados. The procession usually ends with a fireworks display.

The churches of Goa have preserved their heritage and give a sense of calm when you enter them. To explore some more churches I made my way to Old Goa or Velha Goa. Se Cathedral is the largest church in Asia; it is dedicated to St. Catherine. The Cathedral has amazing mosaic work, soaring ceilings and very intricate wood carvings. In the adjoining compound is the Basilica of Bom Jesus. The Basilica is a UNESCO world heritage site and contains the tomb and mortal remains on St. Francis Xavier. His body is placed in a glass coffin under the shower of gilt stars. 3rd December is annually celebrated as the feast of St. Francis Xavier. Once every 10 years his body is taken around Old Goa before scores of pilgrims. The next will happen in the year 2024.

By this time it was already 6:00 pm and I wanted to get back before it got too late at night. I grabbed a quick street snack of pork sausages and pav for Rs. 50 and set off for Colva. Benaulim beach is around 10 minutes from Colva, Johncy’s restaurant is one of the most famous places to eat there. I reached Johncy’s at 8:30 pm and enjoyed a sumptuous meal of tongue roast and butter garlic prawns and headed back to my room. The next day I had planned on visiting ancestral Goa.

Ancestral Goa of the ‘Big Foot’ Museum, is a miniature Goan village describing  Goa – like it would have been a 100 years ago. It is located in Loutulim. There are different sections depicting the way of life and the history of Goans. There is a rock with an imprint of a foot. Legend has it that a generous land owner who used to help the poor was taken advantage of and left penniless. He asked the Gods to give him a place to pray, the Gods gave him one hot stone on which he stood on one foot and prayed. Looking at his devotion they took him into heaven and his footprint was left behind.  The museum thus gets the name ‘Big Foot’ from this legend. There is also a laterite sculpture of Sant Mirabai strumming her tambori. This sculpture is the longest  laterite structure in India. An ancestral Portuguese home is present right opposite the museum.  The entry fee for the house and museum tour together is Rs. 170. The guide that takes you around the house is very informative and you learn a lot about how the people used to live centuries ago.

Before setting out on my trip I had asked friends for suggestions about places to eat and to see. Star Light restaurant by the river in Assolna was one of the top recommendations for food. I went here for lunch. Their Calamari (Squid) stir fry is the best you can have. I had lime soda and beef chilly fry for Rs. 290. The location of the restaurant makes it an ideal place for reading or just sitting and relaxing. You cannot miss this place!

I wanted to see the sunset at a beach, so I decided that I will visit a few beaches before going back to Johncy’s (Yes, I loved the food so much that I went here again). Zalor beach was where I stopped first; this beach is very clean and had only foreigners, probably because it isn’t very popular. Cavelossim beach was my next stop. White sand and few people, my kind of beach. After a walk along the shore it was about 5:30 pm and almost sunset. I moved on from Cavelossim to Varca beach. There were group of local kids playing football on the beach. I couldn’t resist myself and joined in. We played until sundown; it was a perfect end to my Goa trip.